Chances are if you clicked on this headline, your immediate reaction was, “yeah, right”. We’re bombarded with negative information daily – it certainly doesn’t feel as there’s been much improvement in the world.

That’s what makes Max Roser’s project, Our World In Data so compelling. His Vox article: Proof that life is getting better for humanity, in 5 charts, shows how data can tell a story, or in his words “tell many, many stories all at once”.  His team shows that on key metrics, such as poverty, literacy, child mortality, freedom and educational attainment, there have been marked improvement in the average person’s quality of life in the past 200 years. 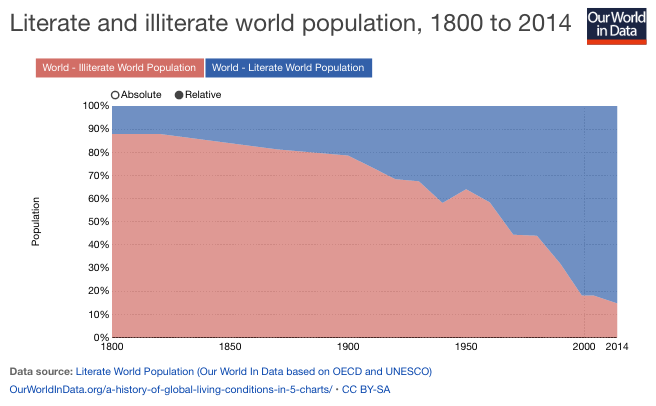 Extreme poverty is defined as living on less than $1.90 per day. Rosner states:

“In 1820, only a tiny elite enjoyed higher standards of living, while the vast majority of people lived in conditions that we would call extreme poverty today. Since then, the share of extremely poor people fell continually. More and more world regions industrialized and thereby increased productivity, which made it possible to lift more people out of poverty: In 1950, three-quarters of the world was living in extreme poverty; in 1981, it was still 44 percent. For last year, the research suggests that the share in extreme poverty has fallen below 10 percent.” 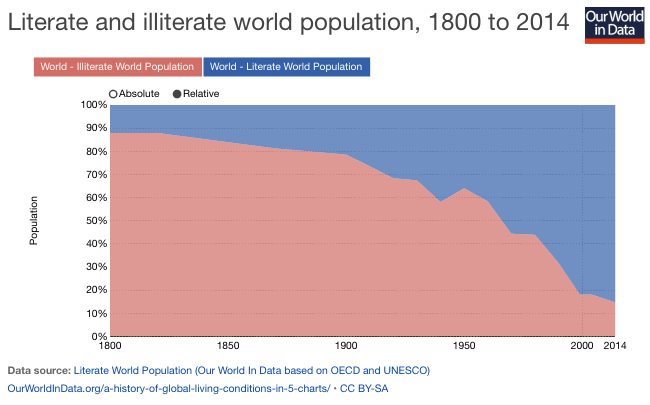 “In 1820, only every 10th person was literate, in 1930 it was every third, and now we are at 85 percent globally. Put differently, if you were alive in 1800 there was a nine in 10 chance that you weren’t able to read; today more than eight out of 10 people are able to read. And if you are young, chances are much higher, since many of today’s illiterate people are old.” 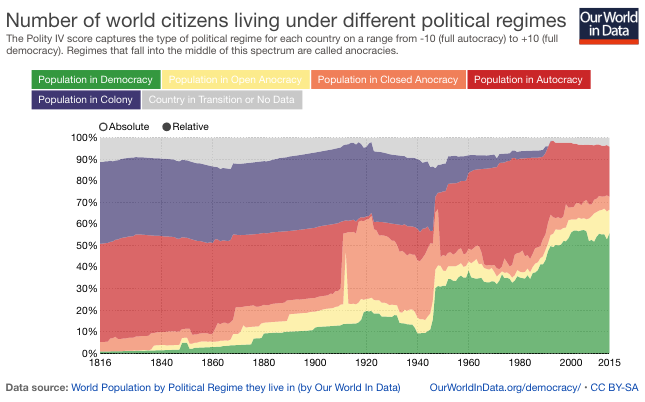 “In the second half of the 20th century, the world has changed significantly: Colonial empires ended, and more and more countries turned democratic. The share of the world population living in democracies increased continually — particularly important was the breakdown of the Soviet Union, which allowed more countries to democratize. Now more than every second person in the world lives in a democracy.”

This doesn’t mean things will continue to improve in all of these areas – past performance is not indicative of future results, but it does help put things in perspective. Most of us are, at this moment in time, much more fortunate than our ancestors were.