Anyone who has visited this website has certainly noticed its star: a whimsical little hedgehog created by Rachelle Meyer. 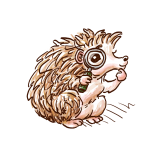 I’d like to draw attention to her current project (which I love!) “Faces on the Ferry”. Rachelle, an American illustrator living in Amsterdam, has been using her daily commute (a twelve-minute ferry ride) to sketch fellow passengers. She’s launched a Kickstarter to convert some of her sketches to prints and help her launch a parallel career as an independent artist.

Her Kickstarter is wrapping up this week. She’s been working her tail off, on social media, by interviewing and through old fashioned print (posters on ferry itself) to get the word out. The campaign is all or nothing, so if she doesn’t make her goal, it doesn’t go on. Please check her Kickstarter campaign here, and if you’re able, donate!

The process geek in me really likes the idea because it’s a great example of “timeboxing”, which caps the amount of time that can be spent on an activity. The idea is to prevent endless tinkering. Here’s Rachelle on AT5 Amsterdam News, doing a sketch on the ferry (interview in Dutch).

Rachelle’s a Texan who came to Amsterdam by way of New York. She explains to Hiraeth Magazine how each place influenced her work, and how she admires the how Texans are mavericks.

Her interview with The Crazy Mind touches on how the idea was born, on how living in Amsterdam is a fairy tale, and how the changing seasons and light affect her work.

Finally, Gumclub provides a good synapsis of the Kickstarter (In Dutch).